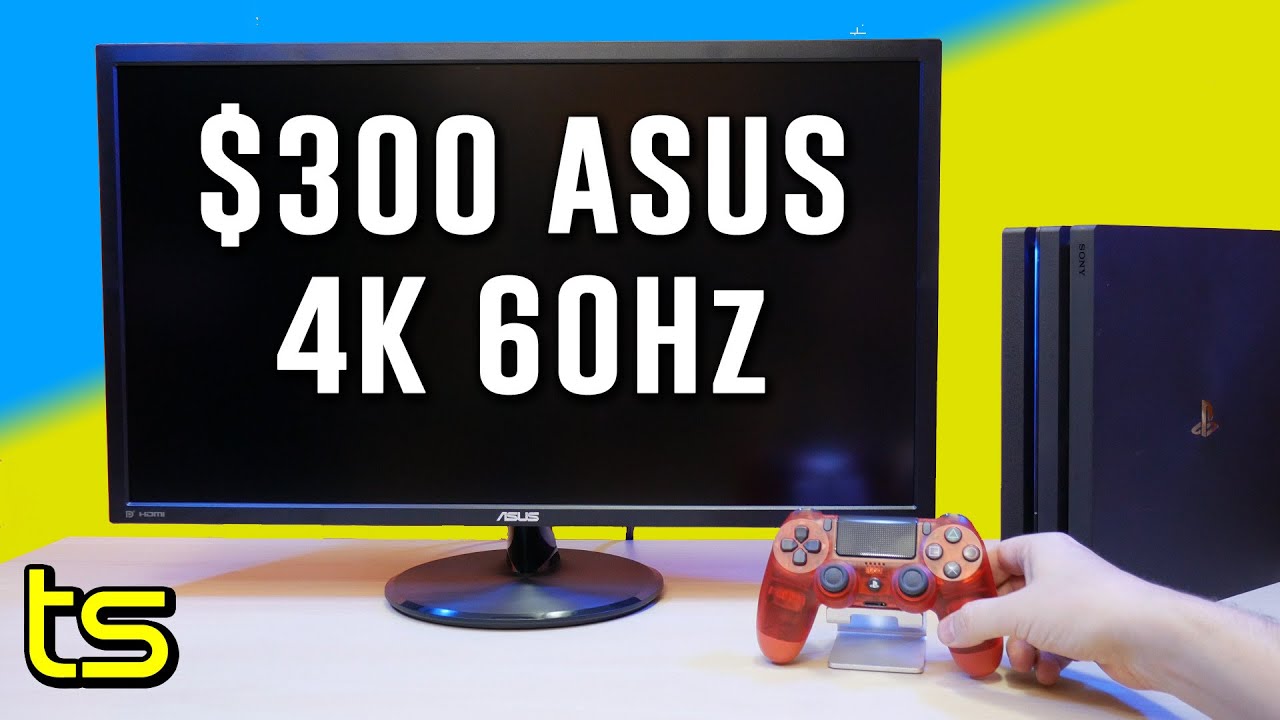 This is the Asus VP28U and it’s a 16:9 aspect 4K monitor priced at $300 dollars on AmazonUS, and 8990nt here in Taiwan. It’s a 28 inch TN panel with the usual ASUS style and looks. The standout features are the large 28 inch 3840 by 2160 screen with flicker-free and Low Blue Light technology to ensure comfort when viewing, and thanks to the TN technology, 1 millisecond response times.

Sponsor: Get 70% off NordVPN! Only $3.49/mo, plus you get an additional month FREE at https://nordvpn.org/techspintw Coupon code: techspintw

It has 1000 to 1 contrast ratio, 170°/160° viewing angles and 300 nits for brightness, and I thought this might be a little low for a 28 incher but actually that’s a really good output for a screen this size and in 4K. Out of the box, we finally see an HDMI cable included. Not only that, but also Asus have included a Displayport cable, and this is probably the first monitor I’ve ever purchased that had one included. After that we have a power cable, and a warranty and quick hook up guide.

Here’s the sturdy metal plated base.Here I’ll show you the stem, and behind it is the removable panel which gives you access to the four screws you’d need to undo in order to wall mount the unit.

The monitor comes with the stem pre-attached, although you can remove it in order to use the rear 100 millimeter VESA mounting holes. Assembling the base is not hard, just line up the base and then turn the screw until tight. Last thing, the sticker comes off so it’s ready for testing. The screen measures 66cm wide by 45 high and 230 deep with the stand included, and the screen is 62mm thick.

And the bezel measures a nice chunky 16 millimeters. The slick display is 5.4 kilograms when assembled, fairly average for a screen of this size. The back of the unit has an earphone jack, one Displayport 1.2 connector, and 2 HDMI 2.0 connectors, meaning you can actually run 4K through one single cable, like I do for the output of my LUMIX G7 camera.

And oh yes, I’m pretty sure it’s because it has Freesync technology that it’s able to show the raw output of my camera at 4K 24 frames a second. So sweet. Now the one downside is that there aren’t any speakers on the Asus VP28U, while that may not be important for some, I actually kind of needed that to output sometimes, but i can just pick up a pair of small speakers to plug directly into the screen.

The screen lacks swivel or height adjustments as it’s at the bottom end, but does have a -5° to 20° degree tilt. The controls have been moved to the back in the form of a 5-way joystick which you can use to navigate the features of the unit. Down at the bottom right corner the faint orange LED shows standby, though turning on the screen the a nice white LED shows operation. Turning on the monitor we have this nice animated high quality logo. If the screen is on standby and receives a signal, it’ll turn on automatically and bypass the logo altogether.

While it looks nice, it really forces you to bend the cables to make them connect in the back. No chance of you doing this without turning the monitor and looking at the port to put it in properly. And no clearance or bend room for the cables. Asus should have shaved off this area to make it easier for customers.

Well, the Steam screen usually takes up most of a 1080p screen, so you can see exactly how much more screen real estate you’ll be gaining by going to 4K. Wow, things are so small now on the Asus VP28U!

The base of the Asus VP28U is pretty solid, as we see by the shake test. It quickly stops and doesn’t wobble. I’m testing the output of my Lumix G7 directly through HDMI at 4K, 24 frames a second to 1080p24.

I found this monitor was really capable for gaming, with a gorgeous picture and high refresh rate and there wasn’t any noticeable ghosting or smearing during gameplay. Pretty impressive for such a budget level monitor.

The Asus VP28U is really good deal for just 300 dollars. It’s not the thinnest or coolest, but what is does for the price, it does very well. The menu control is innovative but that doesn’t mean it’ll work well for you, but for me I’m not changing modes on this monitor much so I guess it’s fine.

With Displayport and dual HDMI in, with one bundled cable for each, it means easy setup right out of the box, so I’ll give it a point for that. I found overall I was very happy with this 4K Asus VP28U. Due to the Freesync functionality, we use this monitor during filming for playback as it’s easy to see the video clips as we grab them. So if you’re doing any 4K filming, it’s especially suited to this kind of application, and you’ll find any 4K shows really well on this screen.

And it’s because of this versatility that you can use it not only for computer gaming, work and movies, but you can hook up a console or two directly as long as you have a couple of good speakers utilizing the Monitor’s audio out stereo jack, and use your PS4 and probably your XBox One as well in all its 4K glory, and if you’re an XBox One user please tell us if it works well and also, if it can do 4K Blu-ray playback.

I’m awarding the Asus VP28U the Techspin Platinum award, what a great monitor that can do it all for such a low price. Now this monitor doesn’t do HDR but to be honest, yes I know you can see a slightly brighter or richer picture in some cases, but in most cases it just seems a bit of a cash grab by the industry, as they always use new specs to drive new TV sales, otherwise why would you need to upgrade, right?

And it’s true its maximum refresh rate is 60 hertz, but then again 144hz 4K monitors are just making it to market as I’m making this video, Acer’s new Predator X27 4K and Asus’ ROG Swift PG27UQ, either of which will start selling for 2000 bucks, and it’ll be a couple of years before that hefty price tag comes down. So for the money right now, this is one of the best quality deals you can get.

Asus has checked all the boxes and then some with this excellent monitor. It did lose a couple of marks for the thick chunky bezel, and the other for no speakers and needing to dive through menu layers to adjust the screen modes, but gained one back for including HDMI and Displayport cables to get you up and running, which as a consumer, I really appreciate.

It certainly saves me time trying to hunt down a DP cable to do more testing, and that connection generally supports 4K out of the box, whereas depending on your graphics card on PCs you may not be able to do 4K over HDMI directly, my MSI GTX 970’s can’t, GTX 10-series can, but Displayport works fine.

Let me know what you think about this in the comments, for me I am super happy with this purchase and its ability to be used for so many different applications including its intended one, being a solid, colorful, nicely bright display for your computing and gaming needs, so if you’re looking for a 28″ inch 4K, i can’t recommend the Asus VP28U highly enough, it’s that good. If you pick one up, shopping through our affiliate links will help us here with no extra cost to you. And follow us on Twitter, Instagram and Facebook at techspinreview.

Find something good, or want some tech reviewed? Join the discussion in the comments. Please take a second to hit Like, subscribe, the bell, and we often reply to your feedback so if you have a question, fire away. We really appreciate you watching this far, thanks for your time, and we’ll see you on the next. Bye for now.

EXTRAORDINARY Acer ET322QK 4K 60Hz monitor should be your upgrade Sound quality for the Logitech Z313’s is one of the best in this price range, and music sounded decent all things considered. Doing a bit of Fortnite, sound was detailed and certainly loud enough…